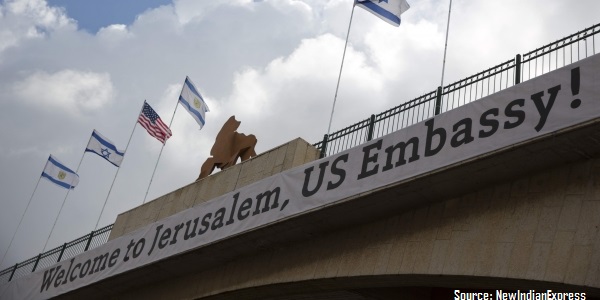 The recognition of Jerusalem as the capital of Israel by the American President Donald Trump and shifting America’s embassy in Israel from Tel Aviv to Jerusalem, has raised more tension in the already disturbed Middle East rendering U.S.A. the first country to recognize Jerusalem as Israel’s capital.

In order to understand the ongoing conflict between Israel and Palestine, it is pertinent to peruse the history. The formation of Israel as a country was the result of the persecution of the Jews in Europe between 1890 to 1948, due to the suppression of the Jewish community so they migrated to what was then British administered Palestine. The settlement of large number of Jews in that region was abhorred by the Arabs, since they oppose Zionist ideology (Zionism is Israel’s national ideology and they believed Jews deserve their own nation or state in their ancestral homeland) and according to Arabs Zionism is a racist ideology that in centered to the well-being of only one community i.e. the Jews.

Later, the two groups fought with each other and the British administration seemed helpless and out of options to control the situation. Subsequently the United Nations voted  to split the disputed land into two countries, wherein almost 6.5 million Jews were placed in a territory which became Israel, and the Arabs who were almost twice the number of the Jews resisted the proposal of the United Nation. The Arab’s were of the view that settling of the Jews is the result of the European colonization that will worsen the situation in the region in near future.

Thereafter, the Arab countries including Iraq, Egypt, Jordan and Syria declared war on Israel in which the Israeli forces defeated the allied forces of the Arab countries and rendered 7 lakh Palestinians as refugees and Israel occupied 77% of the British Palestine territory except the West Bank, Gaza and the eastern Jerusalem which was also later occupied by Israel in 1967 after the famous ‘Six days war’ fought between Israel and the allied forces of the Arab countries, however this time the war was triggered by Israel. Later in order to expand its base in the Palestinian region, Israel started settling its citizen in that area and within few years as many as 5,00,000 Jews settled in the West Bank which is primarily a Muslim dominated country. The forceful settling of Jews in the Palestinian territory is considered violative of Article 4 of the Geneva Convention. The United Nation has stated such occupation and control of Israel over a foreign territory as illegal and forceful.

The main concern between the two nations has always revolved around their claims over the share of land and the ways to acquire it. The Gaza strip which is surrounded by Israel and peopled mostly by Palestinians was governed by the Israeli forces till 2005 until in 2006,the then Prime Minister Ariel Sharon pulled out the Israeli forces from Gaza, the change of events in the region began immediately after this when the Hamas, the Islamist fundamental militant group began to send suicide bombers in Israel and further shelling rockets over Israel. The Israeli’s also retaliated with full force and blocked the trade supplies to Gaza on account of fear of such supplies being used against Israel. But, cutting off gas, electricity and fuel supplies to Gaza was considered inappropriate by the international community as it left the citizens residing in the Gaza strip with no basic amenities leading them to suffer for no fault on their part. This resulted in serious human rights violation.

Whose capital is Jerusalem?

The other bone of contention has been the recognition of Jerusalem as the capital of Israel or of Palestine since both the sides claim it as their capital. Jerusalem holds religious importance for both the Jew and the Muslim community and both Israel and Palestine have considered Jerusalem as its capital.   According to the Jewish tradition, it is the place where Abraham, the first Patriarch of Judaism, nearly sacrificed his son, Isaac, to God, thousands of years ago. Per the Quran, Jerusalem was the last place Prophet Muhammad visited before he ascended to the heavens and talked to God in the seventh century. The recognition of Jerusalem as Israel’s capital by the United States is an absolute change in its foreign policy. Major reason of such change is the aggressive approach of the current American President against  growing Islamic fundamentalism.

If we look back into history and analyse the current situation we will find that the Israeli forces too, have committed serious human rights and humanitarian violations in Palestine by denying Palestinians of their basic rights and by blatantly discriminating between the Jewish settlers in Palestine and the Palestinians in that region. Therefore, the recognition of Jerusalem as Israel’s capital has caused distress and anger to Muslim countries such as Egypt, Iran and Saudi Arabia who are close allies of Palestine. However, the declaration has not overruled the possibilities of any peace agreement pertaining to the land dispute between the Palestine and Israel.

The road to peace

The future course of actions of the international community will decide the future course of events in the Middle East and will pave way for a peace accord between the two nations. Although till now all the attempts by the United Nations haven’t proved to be an ultimate solution to this age old conflict. An amicable solution is plausible only when the conflict is analyzed without any prejudices and bias.