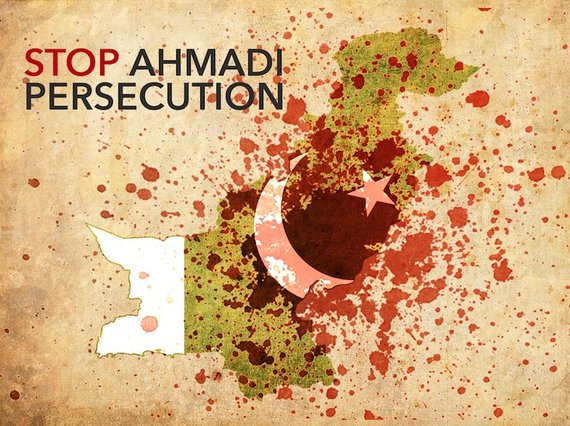 Despite missionary success and expansion throughout the world, particularly in Western Europe, North America, and parts of Africa, Ahmadis have effectively been banned from Pakistan. They are being persecuted as infidels for posing to be Muslims. The have been persecuted for ages and now Pakistan has effective provisions in its Constitution and its Penal Code, declaring Ahmadis as Non-Muslims and punishing them for calling their holy book Quran, calling their place of worship a Masjid among others. It is in this atmosphere that a new P.M. is being sworn in who publicly supported the blasphemy laws against Ahmadis. The fate of Ahmadis is in perpetual danger and, in my opinion, action from the International community and diplomacy which can help expedite a peaceful resolution of the issue.

The Ahmadi community has a British-India origin. Mirza Ghulam Ahmad (1835–1908) was a Muslim religious leader from Punjab province (now in Kashmir). Unhappy with the western colonizers and its effect on Islam, he wondered what needed to change in order to overcome the invaders. Since proselytization by the Church was carried out rampantly in India so to restore the wholesomeness of Islamic traditions that had once influenced much of South Asia, Ghulam Ahmad reinterpreted branches of Islamic thought. He broadcast the message of reform through his prolific writing. Most prominently, he claimed to be both the Messiah and a prophet. Adil Hussain Khan traces the origins of Ahmadi Islam from a small Sufi-style brotherhood to a major transnational organization, which many Muslims believe to be beyond the pale of Islam.

There are actually two branches of Ahamdis:

Lahore Ahmadi: this splinter group does not believe Ghulam Ahmad was a prophet and claim him as a mujaddid, or someone sent by Allah to revive the message of Islam.

Qadianis: The main branch of the Ahmadis who claim that Ghulam Ahmad was a Prophet, subordinate to Muhammad, and received revelations from Allah. Thus revelations do not abrogate the teachings of Muhammad in the way that Muhammad’s abrogated the teachings of the Prophets before him.

The ahmadis in Pakistan have been persecuted for ages. The primary reason being that they are considered heretics by mainstream Muslims. But is that reason enough to persecute a minority

Only in 2017, per ‘[T]he Persecution of Ahmadis’ 4 Ahmadis were murdered for their faith, murder attempts and assaults were made against 2 along with Religion-based arrests and prosecution of 77 Ahmadis who were booked by the police of which 26 suffered arrest or detention.

There were 9 recorded instances of attacks on worship and places of worship of Ahmadis, wrongful imprisonment, wrongful prosecution of Ahmadi leaders. Innumerable instances of Religion based tyranny, denial of freedom of religion. Even burial grounds are not taken away from them. While applying for a passport they have to write a declaration that Ghulam Ahmed was an imposter. They are tortured physically and their spirituality is tortured with the Blasphemy laws and their persecution is encouragement officially with hateful propaganda spewing like wildfire in the country and the judiciary watching cold-heartedly.

In 1974, the riots against Ahmadis were started by the students of Nishtar Medical College, the town of Rabwah became the epicenter of antagonism. P.M. Zulfikar Bhutto – succumbed to Islamist pressure and amended the Constitution, Article 260(3)(B) Constitution Of Pakistan to declare Ahmadis as non-Muslims.

P.M. Zia ul Haq’s government took another step in persecuting Ahmadis by enforcing the Anti-Islamic Activities of Quadiani Group, Lahori Group and Ahmadis (Prohibition and Punishment) Ordinance, XX of 1984 which incorporated Sections 298B and 298C in the Pakistan Penal Code which provide:

Section 298B declared that Ahmadis calling their place of worship a masjid ( mosque ) or who refer to their call to prayer as azaan, or who recite the azaan, will be imprisoned for upto 3 years and will also be liable to a fine.

Section 298C says that an Ahmadi who, directly or indirectly, poses himself to be a Muslim, or refers to his faith as Islam, or preaches or propagates his faith, or in any manner outrages the religious feelings of Muslims, shall be given the same punishment.

The clause ‘outrages religious feelings of Muslims’ is very open ended and vague, to the extent that a person may not even know what all can offend a Muslim.

This legislation prohibited Ahmadi from proselytizing or even professing their beliefs. Scenario worsened a year later when the electorate into “Muslim” and “non-Muslim” by the government requiring voters to declare whether they accepted Muhammad as the final prophet. Ahmadis who declared themselves Muslim faced penalties.

Consequently most Ahmadis have not participated in an election since 1985. Casting a vote would require them to explicitly denounce themselves as non-Muslims, which would have its own consequences. Sadly, Imran Khan, the new P.M. openly declared in his election campaign that he will support these provisions.

The Politics of defining the true Muslim

Even Saudi Arabia and Indonesia have strict laws restricting the religious freedom of the Ahmadis. The foundation of this persecution is the orthodox Sunni view (shared by some Shia clerics) that aspects of the Ahmadiyya belief make them unfit to identify as Muslim. This begs the question, who is a Muslim? And who has the authority to dismiss self-identifying Muslims as ‘infidel’?

Prophet Muhammad is reported to have said:

“Whoever says, ‘None has the right to be worshipped but Allah’, faces our Qibla (Mecca) during the prayers, prays like us and eats our slaughtered animal, then he is a Muslim, and has got the same rights and obligations as other Muslims have.” (Bukhari)

Two ways have been pointed out by Kashif N. Chaudhry on how extremist Muslim groups dismiss other Muslims as infidels.  Firstly by discarding Prophet Muhammad’s definitions and inventing others of their own. The second is by misrepresenting the beliefs of other Muslims and forcing them out of the Prophet’s definition.

Ahmadis have been assaulted, humiliated and discriminated repeatedly at the behest of the Pakistani regime. They were massacred in large numbers in the incidents of 1953, 1974 and 1990.

“We are standing with Article 295C and will defend it,” said Imran Khan during his campaign.

Only few leaders dare to speak out against Pakistan’s blasphemy laws: the last to prominently do so, Sen Salmaan Taseer, was assassinated in 2011.

Imran Khan’s present embrace of the blasphemy laws contrasts with earlier statements. In his 2011 autobiography, Pakistan: A Personal History, the PTI leader lamented that no action was taken against mullahs who

Releasing its manifesto PTI promised to turn Pakistan into an Islamic welfare state, create 10m jobs and work for Pakistanis without “religious discrimination”

Will the Naya Pakistan continue to neglect contributions of Nobel laureates like Abdus Salam simply because he is an Ahmadi? Is there a place for Ahmadis in the New Pakistan? Would Pakistan be willing to repeal the Constitutional Amendment and Ordinance XX which is in stark violation of fundamental human rights of the Ahmadis? Does the Oxford educated, liberal, modern minded P.M. has the eyes to see the persecution, the heart to empathize and the galls to stop it or are the Ahmadis, who are in lesser proportion in Pakistan than what the Jews were in Nazi Germany, destined to the same fate as the Jews.