We all have heard about infamous ‘Investigatory Powers Bill’ also referred to as “Snoopers Charter” which was passed by both Houses of British Parliament in 2016.  India which will overtake its colonial power in terms of GDP in 2019 is all set to follow their lead with respect to surveillance norms. India’s Ministry of Home Affairs on 20th December 2018, by way of notification, has authorized ten central agencies and bodies to intercept, monitor, and decrypt “any information generated, transmitted, received or stored in any computer”. 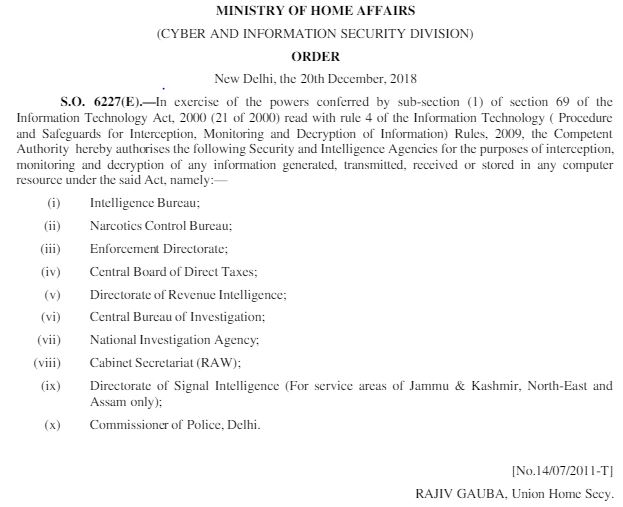 According to Indian Law, the power of interception, decryption, and monitoring of electronic information comes from the Information Technology Act, 2000. It includes specific circumstances such as – the interest of the sovereignty or integrity of India, defence of India, security of the State, friendly relations with foreign States or public order or for preventing incitement to the commission of any cognizable offence relating to above or for investigation of any offence. It’s not the question of blaming the present or the previous government. The UPA government in 2009 brought the Information Technology (Procedure and Safeguards for Interception, Monitoring and Decryption of Information) Rules, 2009 to define ‘interception’ and its safeguards. According to these rules, no person shall carry out the interception or decryption of any information except by an order issued by a competent authority to an agency. However, the UPA government did not specifically name the agencies and left the rules open to misuse. However, the present government in its order has made the ruling specific to 10 agencies.

Though, such powers were already there under the Indian Telegraph Act, but, this notification has widened the power of these 10 agencies. This decision coming so close to the next general elections poses questions on the transparency of the party in power. The government recently also accepted in Rajya Sabha during Question Hour that it had proposed to set up a Social Media Communication Hub involving mass surveillance of citizens of India. This answer was given to Shri D. Kupendra Reddy (Upper House MP) to his Unstarred Question No. 720 on 17th December 2018. The question can be raised that, “If the government is committed to freedom of speech and expression and personal liberty then why does it give such proposals/orders?”

It should be pointed out herein that this is not the first time that the government has taken measures towards building a ‘surveillance state’. Last year, a similar highly advanced surveillance system was tested by Govt., which was called “Vishwarupal”, developed by the National Technical Research Organization (NTRO). This year it planned to implement a mass-surveillance activity via ‘Netra’ or Network Traffic Analysis, which has been developed by India’s Centre for Artificial Intelligence and Robotics (CAIR), a sub-division of Defense Research and Development Organization (DRDO). Apart from  that, there are 5 more broad categories of surveillance programs carried out by the State, like – Central Monitoring System (CMS), National Intelligence Grid (NAT-GRID), Lawful Intercept And Monitoring Project (LIM), Crime and Criminal Tracking Network & Systems (CCTNS) and, New Media Wing (Bureau of New and Concurrent Media). There has been extreme opacity in terms of available information for the above mentioned programs. This can be on the ground of less coverage by media or of the result of action taken by government under Official Secrets Act, 1923. Implementation of the landmark Right to Information (RTI) Act of 2005 has been mixed, with the majority of requests blocked due to the law’s broad categorical restrictions on the release of information.

Besides these measures being ultravires the Constitution of India may have, politically motivated action. Further, the collection of data have storage implications like domestic and foreign hacking, security breach and ethical issues. Thus, the said order by MHA needs to stand down as it creates a dystopian Orwellian society. I want to end the piece by a quote by Julie E. Cohen – Professor of Law, Georgetown Law University from his article ‘What Privacy is for’ in Harvard Law Review:

“when privacy and its purportedly outdated values must be balanced against the cutting-edge imperatives of national security, efficiency, and entrepreneurship, privacy comes up the loser. The list of privacy counterweights is long and growing. The recent additions of social media, mobile platforms, cloud computing, data mining, and predictive analytics now threaten to tip the scales entirely, placing privacy in permanent opposition to the progress of knowledge.”