Dard-ae-Kashaf: Story of a Rohingya Child

The place she called Home

Kashaf did not have the means to watch FRIENDS, and the few friends she had in the make-shift school in the Rakhine Province of Myanmar were also dwindling. Little did she know that her ancestors were disowned by the Myanmar Government way back in 1982.[1] Her Ammi (mother) told her that her erstwhile idol and Nobel peace laureate[2]Aung Syuki was now after their life and was forcing them to evict the nation. Her Abbu (father) informed that though the International community was striping off the titles and criticizing the acts[3] of AungSyi, they might just have to run from their village. “I don’t want to leave my school Abbu,” cried Kashaf. “Our neighbouring village has been burnt into ashes.[4] We could be next!” exclaimed Akram.

Between Hell and the Deep Blue Sea

“Your uncle Ashfaq has gone to Bangladesh. We will also go there. Inshallah, He will manage everything.” Gathering whatever they could, they switched tongas and tempos and tractors and buses, bartering with valuables all this while and when this all subsided, her mother had no option but to spend nights in unfamiliar tents.

When Kashaf asked about the whereabouts of her younger cousin Guddi, her Khaala (aunt) Rabia started crying. Kashaf soon found that Guddi was pregnant with the germs of prostitution and misery. The reality of a Refugee Crisis- the persecution, the starvation, the exploitation, the prostitution all hit Kashaf hard.

Girls from 12 to 17 years have become the main targets of sexual violence and exploitation. Women are either kidnapped, threatened, or deceived by the offer from local people to do unpaid domestic work. The main methods traffickers use to trade for sex, is the so-called dark web on the internet and an offline network of brokers, transporters, and pimps. Most of the girls trafficked are lost for life and cannot be found afterwards.[5]

Kashaf’s family headed for India and landed in Kolkata only to get their dreams shattered as the erstwhile champion of Human Rights and Humanitarian Law,India (through the Central Government) denied any responsibility under the Refugee Convention citing that they had neither ratified the 1951 Convention[6] nor its Additional Protocol[7]. The Government denied specific liability owing to absence of any legislation governing refugees in India and even evicted some relying on ruling of the Supreme Court in Louis De Raedt vs. Union of India [8]  and Hans Muller of Nuremberg vs. Superintendent, Presidency Jail, Calcutta[9]. In both the cases, the Supreme Court held that that under the Foreigners Act, 1946 gives unbridled power to the Government to expel foreigners, and no provision of the Constitution fetters this discretion.

Bereft of government oversight,Kashaf found herself spiralling in a whirlpool of bonded labour and multiple sexual trafficking links.[10] A local pimp lured her family in the guise of a temporary job and trafficked her to Bangladesh. At Bangladesh she was ravished repeatedly. Fortunately, she was rescued by a local N.G.O. and introduced to Nazir Ahmed, a Rohingya refugee camp leader, who had set up an information centre which had already reunited around 1,800 lost children with their parents.[11]

After landing back in India, Kashaf again struggled for the realization of her basic rights, which is when she met Advocate Zaroon who filed a Public Interest Litigation before the Supreme Court praying for a Mandamus to be issued to the Government of India (G.O.I.) to confer refugees like Kashaf and Guddi their human rights and more specifically their rights as children in need of protection and care.

Adv. Zaroon argued that Kashaf was entitled to the protection guaranteed to her under Article 14, 21 and 21A of the Constitution, which ensures the right to equality, life and education respectively. Even though India is not a signatory to the Refugee Convention, Article 33 of the Convention is pronounced as a customary international law which is in consonance with Article 51(c) of the Constitution and is thus binding on India as held in the Vishakha and reiterated in the Puttaswamy ruling of the Supreme Court. Further India is a party to International Covenant on Civil and Political Rights[12], the Convention on the Elimination of all Forms of Discrimination Against Women[13], and the Convention on the Rights of the Child[14]. The conferment of Article 21 of the Constitution and rights under Universal Declaration of Human Rights[15] and CEDAW[16] to foreigners has been upheld by the Supreme Court in Chairman, Railway Board vs. Chandrima Das.[17]

The mandate of the United Nations High Commissioner for Refugees (UNHCR) is decided by the G.O.I. Though the UNHCR has been obviated from Refugee Status Determination of Rohingyas in general, but UNHCR have been given access to Rohingya camps (for status determination). Education continues to be a major concern for children.[18] In a benevolent move the G.O.I. has permitted access to government schools to Rohingya children with Refugee Cards. The Indian society has also furthered this move.[19] Women though not allowed to go outside the camps have been given in-house pportunities by N.G.O.s like that of tailoring. Some Rohingya boys are even receiving College education in Central Universities like that of Jamia Millia Islamia.[20] These are the youth who further protect other Rohingya children from exploitation. Further the Apex Court ordered[21] the Centre to file comprehensive report on amenities to Rohingya refugees.[22]

Advocate Zaroon prayed that the State Advisory Committees must be made functional in all States to allow for the effective implementation of India’s Plan of Action to Combat Trafficking and Commercial Sexual Exploitation of Women and Children. Action planning at the State level should also be expedited. The budget allocated for National Plan of Action implementation at both levels must be increased.

He further prayed that the Government be directed to increase efforts to identify trafficking victims among at-risk groups such as children arrested for prostitution and illegal migrants, and at the same time improve the prosecution and conviction of trafficking offenders in line with the Immoral Trafficking legislation.[23] It is also important to establish a child-friendly legal process where victims of trafficking are not criminalized or punished in any way, but are provided with proper legal counsel and guardianship.

Law Enforcement Agencies need to be aware of the Special Act named Immoral Traffic (Prevention) Act[24] and understand trafficking as not just a single crime or criminal activity but as multiple crimes committed (referred to under the ITPA as the “Basket of Crimes”) on the child and accordingly prosecute such cases.

Kashaf and other Rohingya Muslims in India seek refuge but all they get is an unhygenic patch of land like that in Kalandi Kunj, Delhi with no proper electricity or water, the situation is far worse in Faridabad. With the G.O.I. alleging that the Rohingya’s  are perpetrating crimes, Human Rights Law Network via its fact-finding mission found that no F.I.R.s were registered to that effect and that the allegations are unsubstantiated.

Kashaf and her extended family need help and it is incumbent upon us to take whatever little steps possible- be it providing food or clothes, imparting education, skills training, providing access to resources, giving jobs and at the very least just by listening to their story and assuring them that they are not alone in their fight for basic human rights.

P.S. – Reach the Rohingya Muslims in need (Jasola Vihar Camp) via the contact details in the picture below. Feel free to reach out to  Contego Humanitas and we would be happy to assist you in helping out the Rohingya’s. 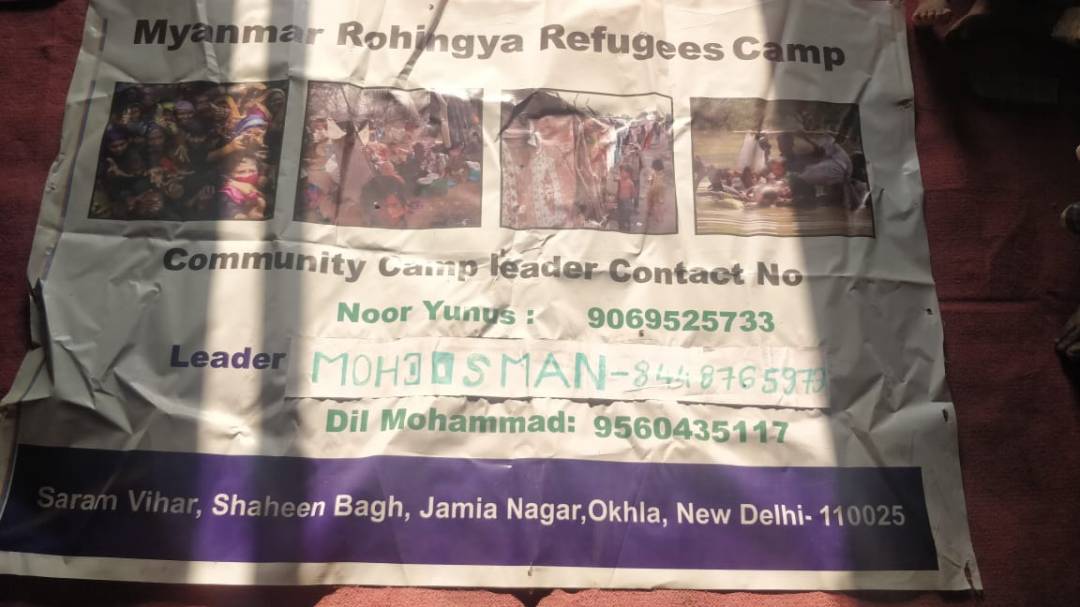 Disclaimer: This short article is a work of fiction based on the everyday struggles of Rohingya Children. This article is a culmination of in-depth legal research and field-study conducted by the Contego Humanitas team with no intention to hurt the sentiments of any party.

[19] Rohingya refugee children deserve to go back to school, too. (2018). Retrieved from https://www.wvi.org/myanmar-%E2%80%93-bangladesh-refugee-crisis/article/rohingya-refugee-children-deserve-go-back-school-too

[20] College dreams in a Rohingya refugee camp. (2018). Retrieved from https://www.telegraphindia.com/world/college-dreams-in-a-rohingya-refugee-camp/cid/1671482 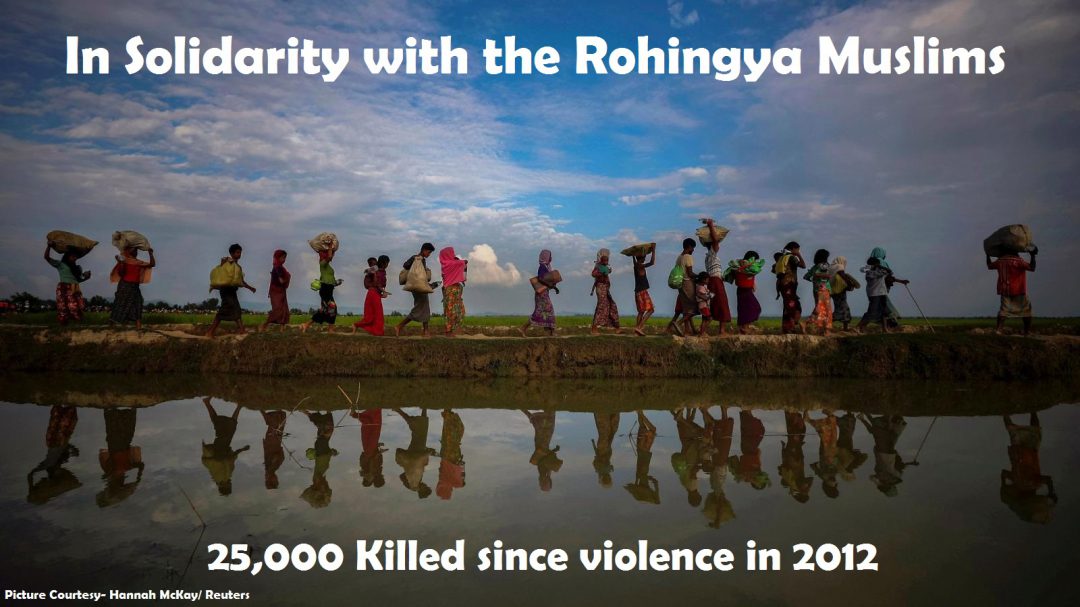