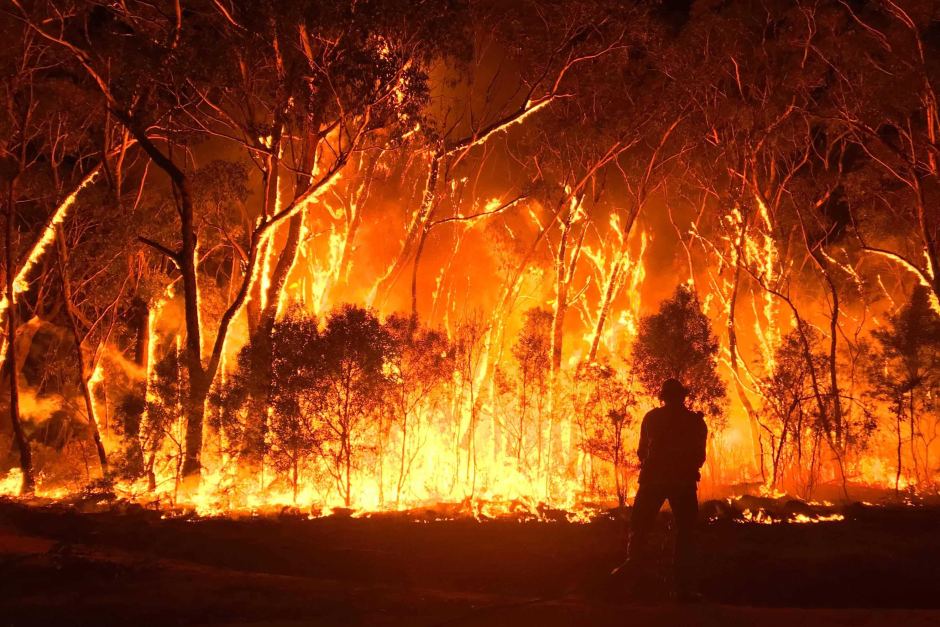 The Apocalyptic Saga of the Kangaroo Island

As bushfires rage through the Australian continent, desertifying many metric hectares of land mass, killing humans and millions of wild animals, destroying properties worth millions of dollars, a dawn of impending climate change risk is upon us.

Climate change risks have never looked so tangible and direct, be it the massive fires in the Amazon rainforest and Greece or deadly hurricanes and cyclones in China and Africa. The World Health Organization (WHO) estimates that climate change-induced disasters like  intense heat waves, severe droughts, floods, typhoons, wildfires, disease epidemics claim up to 150,000 lives annually. Our climate control measures and protocols are also failing us. Treaties like the United Nations Framework Convention on Climate Change (UNFCCC) aimed at “stabilising greenhouse gas (GHG) concentrations in the atmosphere” over the decade have instead witnessed record levels of increase.

The majority of the world leaders are yet to wake up to it and take it seriously and Australia has served an unfateful illustration of the same.

Ecological Front of the bushfires

Amidst sharp criticism meted towards Australia’s liberal party for downplaying climate change risks and poor allocation in its budget for combat mechanisms, it cannot be disputed that the country’s fire monitoring and combat mechanisms are still much better than what most of the country’s across the world possess.

Australia has had bouts of both natural and unnatural (Like ‘The Ash Wednesday Bushfires’ of 1983, ‘The Black Saturday Bushfires’ of 2009, alleged to have been started due to faulty unprotected power lines) conflagrations. To tackle such conflagrations, Australia has in its arsenal, aptly hammered down, comprehensive measures for fire safety and combat including preventive measures like “hazard reduction” techniques (involving controlled burning of bushes and grasslands during winters to reduce the flammable materials available during the summers when temperatures rise, lowering the risk of uncontrolled conflagrations)

However, as the world climate changes, temperatures rise and ecological events become unpredictable and it gets harder to control these fires. Fire susceptible summer season continues to extend every year, leading to a shrinkage of the window to carry out preventive activities and planning out coping mechanisms. Climate change factors like El Nino, Indian Ocean Dipole and Southern Annular Mode wreaked havoc in the form of long spells of hot and dry weather, rising heat waves, mild winters, giving Australia its hottest years ever, leaving the bushes and timber to dry, and making the country susceptible to fires of massive strength.

Further, decreased rainfall and severe droughts, are leading to water insecurity (The bushfires and intense droughts have started to partch the town of Murrurundi in New South Wales, where surface water sources as well as underground water sources are drying up fast, leaving the town dependent on surrounding parts for water), threatening the availability of fresh water for consumption, food production and combating fires. Voluminous amount of resources like fire retardants (fertilizers mixed with water and other chemicals to slow down the rate of spreading of fires) and water are doused on the fire as harmful chemicals are released into the environment, further aggravating the global climate change. The fires have not only led to loss of human life but also but has also caused massive theriocides (the act of killing of animals) of Australia’s key icons – kangaroos and koalas apart from millions of undocumented deaths of other species. As reported by The Guardian, Australia is expected to loose up to 30 percent of its koala population to fire as thousands of them get burned alive and millions of hectares of wild bushland habitat are lost.

These bushfires also have many transboundary ramifications. The air quality in and around the country has started to worsen. The carbon dioxide released from the fires has also started getting absorbed in the water bodies in and around Australia, leading to acidification of these water bodies, making them unfit for usage and survival for plant and animal life.

Moreover, as stated by NASA, the smoke from these fires have started travelling around the globe, making the skies in South America hazy and yellow. This smoke can even condense to form storm clouds, travelling thousands of kilometers from its origin and spreading fire embers, igniting fires at more places. Furthermore, the smoke has produced an orange, obnoxious smoke in skies of New Zealand and has turned the colour of its glaciers caramelized pink.

Though climate change and rising temperatures have loaded the gun, the sluggish climate policies and damp combat mechanisms are said to have pulled the trigger for Australia. The inefficacy of these policies, coupled with climate change issues proved to be the perfect disaster recipe for Australian bushfires. Sluggish environmental policies is not a new phenomenon at the political front of Australia. Be it under labour party’s Paul Keating government in 1996 or liberal party’s John Howard government till 2007, Australia was a keen follower of a “no regrets” policy meaning that it would not undertake any measures to cut down its emissions and adopt environmentally friendly ways if they had an adverse effect on its economy or trade relations. Even today, the efficacy of the Australian politicians to control the fires and make suitable climate change policies dwindles as Scott Morrison’s (Prime Minister of Australia) liberal party continues to dismiss the links between bush fires, climate change and their failure to deal with them.The party failed to account for the graveness of the danger posed by bush fires, despite many examples set in the past by massive fires. To add to this, misinformation has been spreading much like these bushfires. To get attention off the role of climate change in causing bushfires, environmental activists who discredited cutting massive number of trees and bushes as a precautionary measure are being blamed for these fires. Further, phony claims like bushfires being a form of arson terrorism, tactic of religious warfare etcetra trended on the social media.

The Liberals, have been heavy on natural-resource extraction, cutting down the budget on areas like climate change and focusing on “key industries” like coal and iron extraction (which form a significant part of the country’s export) on an extent unmatched by any other party before. The federal government had recently approved the highly controversial (as it will harm the fragile ecosystem of the Great Barrier Reef) Carmichael mine project of Adani Group to extract coal from seabed. The liberals had also scrapped carbon tax while Australia failed to meet its obligations under international climate change control agreements and protocols (like The Kyoto Protocol and the Paris Agreement).

A similar political stance was maintained prior to the Amazon wildfires by the right wing brazilian government of President Jair Bolsonaro. Brazil, like Australia also saw many environmentally numb policies being enforced, substantial cuts in budgets for environment protection and rolling back “once strict” environmental policies so that more land is available freely in the Amazon rainforest for farming, mining, and logging to help the economy grow, even if it is at the expense of the environment.

These raging fires, apart from causing loss of life and property might also slow down the Australian economy. The consumer and tourism sector is taking a hit  as investments fight shy. The economy’s future is laced with rate cuts, lowering of policy rates, quantitative easing measures like issuance of government bonds and interest rate control mechanisms. The stability of independent and governmental financial institutions is also under threat. Not only financial risk but also reputational risks loom for financing activities that could contribute to worsening of the climate change like coal and iron mining, timber harvesting, etc. They also face a risk of increased litigation and cases on their failure to control climate change risks.

However, as talks about combat and recovery from current problems dominate the discourse, the ‘fire seasons’ are yet to begin properly. The peak time of heatwaves, droughts and fire have not arrived yet and already so much damage has been done. Various parts of the continent are also expected to witness heavy rainfalls, flooding and strong cyclones, all aggravated by climate change.

This calls for proactive governmental involvement to take up climate change policies to their national agenda to revamp Australia’s resilience and coping mechanisms. There is also a need to take international climate change obligations seriously, hinging upon cleaner sources of energy and reduction of emissions.

Yesterday it was the Amazon rainforest, today it is Australia and tomorrow it might be all those vulnerable places of the world, which fail to wake up to the risks of climate change and act upon them while passively accepting these disasters as the world’s “new normal”. 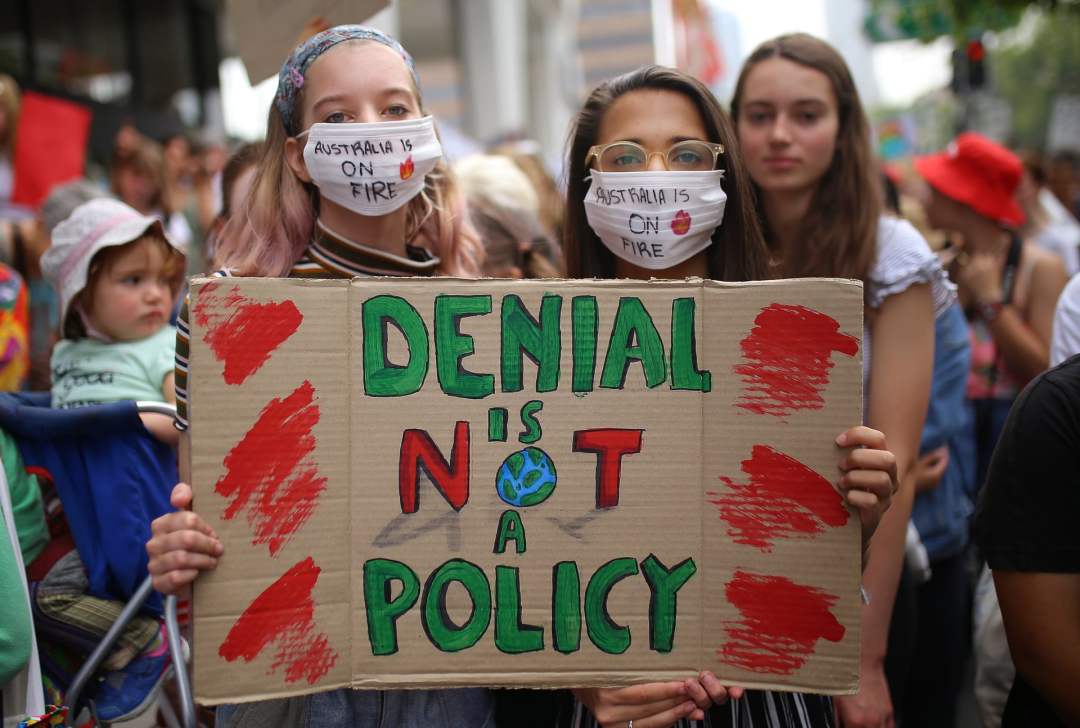