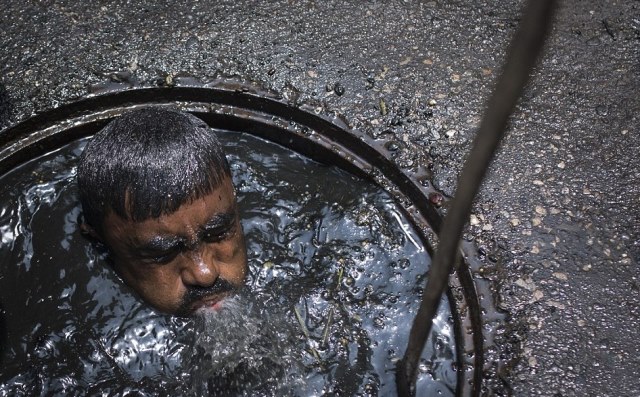 The Shit Has Always been Real

Status quo always seems to be a comfortable place to be. All change causes some discomfort which is why societies are reluctant to change, however we must understand that our comfort in status quo is illusory. We are so used to the violence and discomfort that is being caused by the status quo that we don’t see it as discomfort anymore. Revolutionary actions are violent, and that is the reason cited by many who refuse a call for change, but they fail to recognize the everyday violence that is already caused by the status quo, which is all the more reason for change.

In his daily work place a manual scavenger is faced by various life threatening diseases, besides the undignified nature of the work itself. His kids are doomed to indulge in the same work as their father and his fathers. They cannot escape the system because they are outcastes and they won’t be accepted in any other work place. This is the violence of the status quo.

In a reply given by the Social Justice Ministry to the Lok Sabha, on Tuesday it was revealed that 110 lives were claimed by the practice of manual scavenging in the year 2019 which is an increase of 62%, from 2018 when 68 people had died due to the same. Manual Scavenging was declared illegal in India in 1993 by way of the Manual Scavengers and Construction of Dry Latrines (Prohibition) Act, 1993. Further, the Employment as Manual Scavengers and Their Rehabilitation Act, 2013 mandated identification and rehabilitation of sanitation workers along with mechanisation of sanitation work. However, the law has been obviously poorly implemented. In the case of Safai Karamchari v. Union of India (2014) it was held that Manual Scavenging is against fundamental and international human rights. Further, the Supreme Court commented that the state has demonstrated continued unwillingness to implement the law.

The Supreme Court’s observation is very serious here, and begs the question: what could be the reason for this intentional and persistent omission by the government to implement this law? From a societal point of view, obviously the stigma is persistent and there is a natural inertia and reluctance to move on from the status quo. But this stigma is further exploited in Indian politics. Not all Dalits are Manual Scavengers but all scavengers are Dalits. The continuance of this practice is not only because of the age old oppression of this outcaste by other castes. There is a more modern and “democratic” reason for this, which is vote bank politics. The continuance of oppression of the Dalits is profitable to those whose vote bank is the ‘continually oppressed dalit’. Why would a pharma company that profits on curing cancer permanently cure cancer?

The recent Delhi election is a classic example of our reluctance to consider this issue. The Delhi Government has done a laudable job by introducing a fleet of 200 machines that are fitted with equipment that is apt for cleaning of sewage. However, let alone the Bharatiya Janata Party (which bagged the second spot), the Aam Aadmi Party itself did not use this achievement as much as they could have in their campaign. The driving issues of the AAP campaign were free transportation, mohalla clinics, subsidised power and education. Their achievement of mechanising cleaning of sewage does not enter the list. Perhaps, this is because political parties are aware that people do not really worry about this issue in their day to day lives.