“Reforms” for whom? – The myopic labour law reforms in Uttar Pradesh 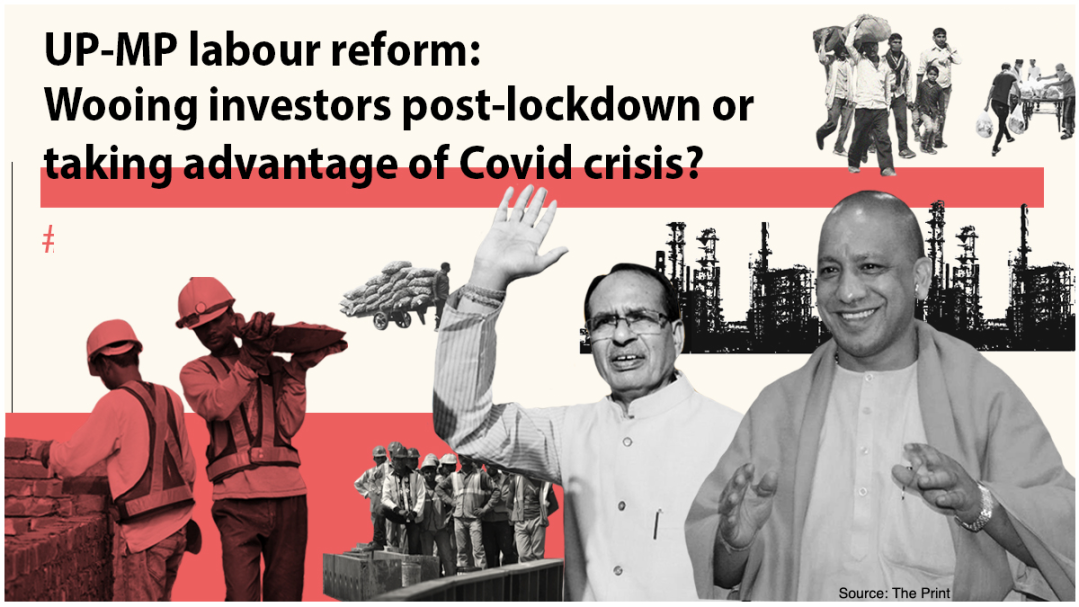 As the COVID-19 pandemic flares fast and far, affecting millions of jobs and businesses, already leaving the informal and migrant workers in dire straits (unpaid, away from homes and many dead), India’s formally employed labour force stands next in the queue. This article shall delve into the state of labourers in India, the nature of reforms introduced for them and whether it can be expected of the reforms to deliver upon the social and economic benefits that they promise for the labourers.

Following the suit of Madhya Pradesh, Gujarat, Himachal Pradesh, Punjab and Rajasthan, Uttar Pradesh has now introduced its version of “labour reforms”. It has cleared an ordinance (“Uttar Pradesh Temporary Exemption from Certain Labour Laws Ordinance, 2020“) suspending almost all central labour laws in the state for three years. This ordinance shall take away the hard earned rights of labourers to be guaranteed  minimum wages and equal remuneration among men and women. Further, with the newly introduced leniency in hiring-firing workers, removal of cap from maximum work hours and regular inspections, formation of worker unions and safety-sanitation standards done away with, there are high chances that the labourers might be exploited inhumanely.

A staggering, 85-90% of the Indian workforce is informally employed (as per the Economic Survey of 2018-19 and the Niti Aayog’s Strategy for New India at 75, 2018) which anyway is not privy to the concepts of minimum wages, social security and protection against exploitation. And, now when labour laws are being diluted, it might pressure the hard-pressed, formally employed workforce to move into informal sectors, where conditions are already abysmal. The stated goal of formalization of the workforce and increasing employment opportunities is thus likely to fall on the ground.

Excusing its hand and clearing the way for the invisible hand of the market, the government explained that labour laws were relaxed to rejuvenate the slumping economy by retaining and attracting investors and encouraging stalled businesses and industries to restart which would ultimately generate more employment for the workforce.

However, myopic as it is, even if the aim behind these “reforms” succeeds, it would be a mere short-term boost. While relaxed laws might ease the operation of businesses, leading to increased output and upward sloping, V-shaped recovery of the economy, in the long term, it is in for another slump.

In such unprecedented times, while the government should have tried to revive the economy through stimulus packages and liquidity in the first instance, inducing techniques like public spending, it decided to relax labour laws (Though, a Rs.20 trillion package has now been introduced for wage support to labourers, farmers and MSMEs, it only came post dilution)

But there have been no conclusive empirical findings to establish a negative linear link between stringent labour laws and economic growth (The Economic Survey of 2018-19 had claimed that it did prove so, while completely failing to take into account the interplay of various other factors like labourer composition and literacy, availability of aids and subsidies to business, business environments etc.). While a definitive positive linear link has also not yet been established, stories from countries with stringent labour laws like Germany, Finland, Denmark, prove that the relationship between labour laws and the economy is indeed positive. An economic analysis  also proves that these regulations enhance efficiency by ensuring consistent output, smooth business operations and hedging risks of market failure and information asymmetries, thereby promoting overall social welfare. Logically, during a slump in an economy, the ‘floor’ level of production is likely to be higher in countries with stringent labour laws as they shall be forced to retain labourers and continue production, unlike flexible lawed countries who retrench labourers at first sight of a slowdown. The ‘ceiling’ of the production (guided by forces of demand and supply) however, is likely to remain the same, stringent or not. Hence, the average level of production and employment is likely to be higher in stringent lawed countries.

Social Promise of the “reforms”

However, while the economy is left to ride this short-lived relief, in lack of safeguards against exploitation and unfair treatment, the living and working conditions of the already languishing workforce will worsen, leaving them entirely bereft of economic and social security. An example of the same can be seen in the spiked non-virus-related deaths among the labour class. According to an independent database, a whopping 652 non-virus-related deaths (as on 19th May 2020) have been reported since the pandemic flared (out of a total of 4,235 deaths, 3583 being virus related). This makes 15.3% deaths out of reasons like Starvation and financial distress, road/train accidents due to migration/walking, lack of medical care for vulnerable groups and police brutality. These include the recent instances of migrant workers being crushed by a goods train in Aurangabad as well as migrant labourers being killed and injured when a truck overturned in Madhya Pradesh’s Narsinghpur district.

Further, in absence of worker unions, there would be no place to stage workers’ voices, thereby reducing their bargaining power and creating an enabling environment for firms and enterprises to demand exploitative commitments from workers to reduce their operating costs and maximize revenues. This will cause the purchasing power of the economy to dwindle as cash in hand reduces (as wages would be lean) ultimately affecting the aggregate demand in the economy. With regulations of floor wages and work hour ceiling out of way now, workers lucky (or really?) enough to have jobs in the first place will be made to work cheaper and for longer hours leading to physical, financial and social burnout. Additionally, a free hire and fire policy might even lead to a “problem of allegiance”, leading to the workers according less importance to constantly changing, exploitative employers during their short job tenures. This could translate into lower workplace productivity, needing higher investment of time and money on part of employers, to monitor and teach work to a new set of people every now and then, hampering the efficiency of these ventures. Further, migrant worker exodus to these states (homeland to a major chunk of the unorganised, migrant population in India) will pressurise the already out-of-breath vacancies, leading to overcrowding and a sharp reduction in labour demand and wage rates.

Even during normal times, India cannot boast of its labour laws to be pro-workers. The ITUC Global Rights Index, 2019, in the degree of respect for workers’ rights index, rated India 5 (meaning no guarantee of rights). Moreover, though Ease of doing business Index (EODB) does not account for labour laws stringency, India has been proactively trying to improve its EODB ranking by deregulating labourer protections and laws to make in a bid to ease business. But discontinuation of even these protections is likely to make conditions worse for the vulnerable.

Under one of the now-suspended minimum wage laws, National Floor Minimum Wage had been prescribed at Rs. 178/per day (though central trade unions have already been demanding a minimum wage of Rs.692/per day, as recommended by the 7th Pay Commission). However now, it is upon the sole discretion of businesses to decide wage rates (which are bound to lower than the national floor wage, for these are profit maximising, rational ventures operating in a market where jobs are scarce while job seekers are not)

Let alone the ideals of availability of living wage, equitable distribution of wealth and removal of concentration of resources, enshrined in Directive Principles (in Articles 38, 39 and 43) and the preamble of the Indian constitution, phasing out of minimum wages falls foul even to the critical Supreme Court ruling mandating minimum wages in Edward Mills v. the State of Ajmer. The removal of the cap from maximum work hours (accepted as “ not to exceed eight in the day and forty-eight hours in a week”) also falls foul of Hours of Work (Industry) Convention, 1919 that India had ratified in 1921 and Minimum Wage-Fixing Machinery Convention, 1928 (No. 26) that India ratified in 1955.

Constitutional Validity of the ordinance

The dilution fails the Constitution and international treaties at various levels as discussed above. Further, ‘Labour’ falls under the concurrent list of the Indian constitution, meaning that both the state and the centre have powers to make and amend laws on the subject. Per Article 254 (2), any amendments (through the way of bills or ordinances) repugnant of the central law (the labour protection laws in this case) are challengeable unless it gains a presidential assent.

The ordinance, then, should be passed through Constitutional challenges and judicial reviews (Supreme Court in Krishna Kumar Singh v. State of Bihar, 2017 has promulgated that ordinances are in fact subject to judicial review), questioning the almost unlimited power in hands of executive and the interests it serves.

Inequalities (social, economic and political) have consistently sustained themselves in the Indian society and its psyche. They have manifested themselves preying on individual heterogeneities like age, gender and disabilities, diversities in physical environments and variating social climates (as illustrated by Amartya Sen in his capabilities approach to explain inequalities)

Law can be used as a tool to equalise these inequalities and aiding those who have always been disadvantaged. However, such anti-labour reforms reinforce the long-running unequal categorisations, wiping away the goals of bridging gaps between the advantaged and the disadvantaged that the hard-earned labourer rights in India had strived for.

While it is undeniable that the slumping economy has to be supported, let’s not cash in on the vulnerability of the downtrodden of the society who are left to their means, already battling with the risk of loss of health and livelihood due to the pandemic (A plea for the same has been filed in the Supreme court, seeking directions to quash the so-called “reforms” in Uttar Pradesh, Madhya Pradesh and Gujarat). Making use of a good crisis should translate into fair business reforms through reinforcement of equality and fair treatment rights that we promised to all citizens of India rather than merely catering to the interests of the privileged in the name of “reforms” for the poor.

Authored by: Oshin Malpani| National Academy of Legal Studies and Research
Special Thanks to Dr. Garima Yadav & Mr. Harsh Bajpai for their comments